Juan Reyes is Juan Manuel Espinosa Estrada, born in Santa Coloma de Gramanet, Barcelona the 15 of January 1959. Juan begin to play the guitar very young only 11 years old, when his father very fond of Flamenco gave him his first guitar. After a short time his father knew that his son learned very with the guitar and needed a professor so his cousin Paco Arroyo ( a great guitar player) recommended to start with Francisco Villar and after a year he began lessons with Paco Santaella who was the one that shoved him all the palos del Flamenco. 16 years old he was recommended from his cousin Paco Arroyo to go on stage in the best place of Barcelona for Flamenco, el Tablao el Cordobés , also known from the artists as the University del flamenco. Here Juan accompanied and played for the best Artist at that time: Los Farrucos (who were the grandfather of the actual Farrucos). 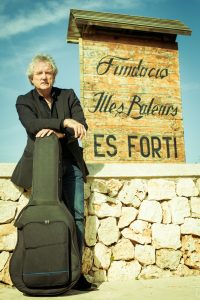 Later he started his own career on Mallorca together with his sister Mari Carmen who is flamenco dancer and for the next 20 years they were working all over the island dedicated to their passion: el Flamenco.

In 1993 he went to Cancun Mexico to work and were he started a great friendship with the best guitar player in the history Paco de Lucia.

The friendship gave part to start the company in Spain DE LUCIA GESTIÓN S.L. where they merchandise first class guitars signed by the MAESTRO Paco de Lucia, the first official web side and translated his music into PARTITURAS and things connected o the world of the music the guitar and flamenco.
With the time Juan went back to Mallorca where he actual lives with his wife and 3 kids.

After the most to early death of Paco de Lucia , Juan decided to go back to his guitar, where he now do guitar concerts from north to the south on the lovely island of Mallorca, which gave him the inspiration for his new CD Aires de Llevant.